As I’m sure many of you will agree, the weather has been unusually hot recently. So hot, in fact, that it’s almost 30 degrees Fahrenheit here, almost 10 degrees higher than the average temperature for January and February.

I’m talking about Moscow, of course. As you might have guessed from the title of this post, I am currently participating in the Math in Moscow program. For a sketch of the program, here is what Shu Li, another math peer-advisor, wrote:

“When people think about study abroad, many would associate it with exploring the culture, meeting new friends, taking language courses or just having a really good time, but the truth is, you can also do serious math while you are enjoying the serious fun in a foreign country.

“Math in Moscow is a 15-week program offered in both spring and fall semesters. Hosted in Russia, it is sponsored together by the Independent University of Moscow,  the Moscow Center for Continuous Mathematical Education, and the Higher School of Economics. It offers a variety of math and computer science courses in elementary, intermediate, and advanced levels and even has a couple of Russian language and history courses if one is interested. A few of the math courses are rarely offered in Berkeley, so it might be a great opportunity to explore a new field of math! All the classes are taught in English and the best part of the program is of course the location. You will study at the Independent University of Moscow located in a cozy building in the very heart of Moscow. Moscow is the cultural, economic and political center of Russia. There are numerous theaters, museums and art galleries in Moscow. The Bolshoi Theater and the Tretyakov Art Gallery are world famous symbols of Russian culture. During the program, there will be several organized tours around Moscow as well as short trips to the Golden Ring (ancient Russian towns with unique architecture), and a must-go visit to the northern capital of Russia — St. Petersburg.

If this all sounds interesting to you, make sure you apply before the Fall 2016 deadline which is 3/30. More detailed information can also be found on their website: http://www.mccme.ru/mathinmoscow/. There is also a facebook page where you can find answers to your specific questions: https://www.facebook.com/MathMoscow/.”

I will only add that if you are interested in applying for the Fall 2015 program, you should also consider applying for the American Mathematical Society’s Math in Moscow Scholarship program here. Every semester the AMS awards five students from universities in the U.S. a rather sizable grant to participate in the program. (You might have noticed the posters for MiM and the AMS scholarship next to the advising offices on the 9th floor or in MUSA’s office in Evans 938)

That said, I wanted to share a few notes about my own experience in the program so far. But first, here is a photo of the Berkeley cohort this semester: (which is the largest from one university in the history of the program!)

I think the best way to give you a picture of what it’s like to study math in Moscow is to walk you through my schedule for a typical day.

I wake up around 8:45am. Believe me or not, waking up is just as hard as it used to be in Berkeley. I, then, proceed to quickly go through the usual wake up routine, put on warm clothes, make sure everything is airtight (<== very crucial), and get out of the dorm to face the day. The walk to the metro station is just a couple of minutes. On the path I walk by a children’s park covered in ice, two super markets, a subway, and at least four pharmacies! We buy monthly student passes for the train which cost about five dollars. The trains are very frequent and it takes about 5 minutes (two stops) to go from Studencheskaya to Smolenskaya. Then there’s a short walk to IUM, which includes going through an underpass famous for it’s buskers playing anything from classic 70’s rock to classic violin solos.

Finally at IUM. It was founded to become an independent school of all sciences, but only the math department was strong enough to compete with other schools in Moscow, so now IUM is entirely focused on mathematics (with some connections to computer science and theoretical physics too, of course). There’s a math publication right in the lobby, as well as two chess desks, only a few steps away from the lunchroom. A medium-sized math library is the main attraction of the second floor, as well as offices of MCCME, third floor is where the classrooms are, and fourth floor hosts the French-Russian Mathematics Laboratory (here lab refers to group really), which is kind enough to allow us to use their tea and coffee room, as well as a very nice auditorium.

The main difference between classes in Berkeley and Moscow is that classes are held once every week and for three hours. There are definitely ups and downs to this, but I personally prefer it. Some classes are half lecture half problem solving, but most of my classes are three hours of lecture with a break in the middle.

On Mondays my only class is algebraic geometry. I took Math143 last semester with Prof. Sturmfels which was heavily focused on commutative and computational algebraic geometry, but there are many ways of approaching algebraic geometry and so far in Moscow we have been mostly studying the Veronese curve, projective geometry, symmetric and anti-symmetric tensors, the Grassmanian, Plücker embedding, et cetra and will soon spend a lot of time on Zariski topology. After alg. geo. I have a reading course with the same professor on toric varieties, but now we are moving to sheaves which is exciting.

No class on Tuesdays. Perfect time to study and work on homework problems, especially for Wednesday classes.

Wednesday is my favorite day, mostly because of the commutative and homological algebra course, which is sort of equivalent to 250B mixed with some topics from 253 and 256A. It’s an incredibly hard course taught by a rather young professor. It takes hours to do the problems, but so far it has been extremely fulfilling. After that I have algebraic number theory, a very condensed course, but I prefer to study the notes at home.

Again, no classes on Thursdays, but I regularly meet with a professor to work on a problem related to unitary matrices. You could call it research, or just trying many many different ways to attack a problem.

Friday is almost weekend, but before that I have knot theory in the afternoon. Never have I ever seen a math course that is simultaneously so pure and so applied at the same time.

Weekends, going places, two photos of Red Square at midnight. [to be completed soon … including a story of being escorted out of Red Square after midnight by the Russian equivalent of US Secret Service!] 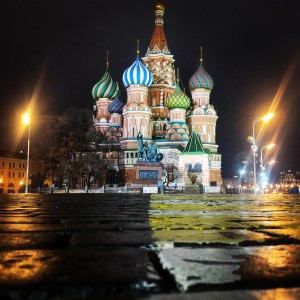 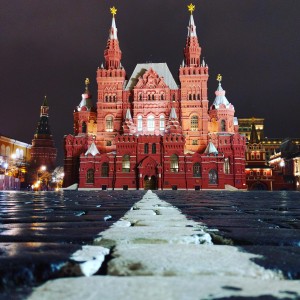